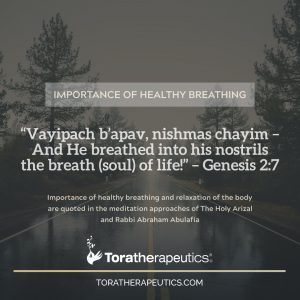 Last time we discussed the importance of nasal breathing, especially when inhaling. Although we touched upon some of the benefits of nasal breathing (CLICK HERE TO VIEW), we will delve a little further in this installment.

In the 1950s, Konstantin Buteyko developed a breathing technique to help people with various issues such as asthma, hypertension, panic, etc. Noticing how labored and noisy breathing seemed to parallel poor health, he studied the effects of heavy breathing or “over-breathing.” He himself had high blood pressure that was getting worse, and experimented by slowing, diminishing, and quieting his breath. His symptoms diminished over a short period, and his pains went away.

Over the next few decades, his research brought about a complete method that is widely used, and highly effective. I incorporate some of the Buteyko principles in my work. However, it is very detailed and “restrictive” for some people, so I use it “flexibly” and accommodate the needs of my clients with other techniques as well. Some of the main elements of Buteyko’s breathing method (popularized in the West by Patrick McKeown – Buteyko’s main protegé and proponent):

Most people who are habituated to over-breathing or mouth breathing are subject to various problems, both physiologically and psychologically. Over-breathing or hyperventilation can cause sensations of anxiety and overwhelm. Literally, by training oneself to breathe through the nose, slower and calmer, such anxiety symptoms go away on their own.

By practicing nasal breathing and Buteyko principles, many conditions can improve. I have seen it with myself as well as clients. The great thing about learning these concepts and techniques is they are free and portable! Improvements are visible very quickly after beginning practice.

With a minimal investment in these practices, people have seen incredible results. By regularly practicing breathing techniques such as the Breathing Contest™, Double Outbreath, 4-7-8 Breathing, etc. which are featured in my free audio: INSTRUCTIONS FOR BREATHING TECHNIQUES, clients with physiological as well as psychological issues find quick benefit. Many conditions have completely remitted by only using breathing techniques such as Buteyko principles. In my own practice, even when these issues were not the reason why the client came to me, the person benefitted. Check out these conditions that I have had success with: snoring and apnea problems, high blood pressure, asthma, SVT (supraventricular tachycardia), IBS, depression, anxiety and panic, ADD, and more. Most of these people are simply using my BREATHING CONTEST™ at least once or twice daily (which employs some of the Buteyko principles). Do try to practice these basic principles we mentioned in an earlier blog BASIC BREATHING FOR BEGINNERS: